Deaf.Adventist.org is an official website of the Office of Special Needs Ministries of the Seventh-day Adventist World Church.

Seventh-day Adventists are devoted to helping people understand the Bible to find freedom, healing, and hope in Jesus.

2015 Easter Evangelistic Caravan Union-Wide “The Passion of Christ is You” brings more than 5,000 baptism in a comprehensive way of evangelism where every member  pastor, administrator and employee of the SDA Church in every institution was involved for six to eight months following “Jesus’ method alone“.

Every year at Easter, for the last 45 years, the Bolivian Union Mission has capitalized on this special week to do comprehensive evangelism. With months of anticipation, churches become Centers of Influence, homes turns into Homes Influence, and members, Members of Influence, following “Jesus’ method alone,” loving people, meeting their needs and telling them the rest of the story.

This year the response was massive, and the leadership of the Union and the Missions gave the example. Each employee of the church of all our institutions, at all levels, was involved shoulder to shoulder with the members in the trenches in one of the three simultaneous efforts.

We ended Sabbath afternoon with a simultaneous mass baptism in La Paz with local pastors. In Santa Cruz with John Bradshaw, It Is Written Speaker/Director. I have the opportunity to target Cochabamba. Stadiums and coliseums were packed every night with the presence of thousands of visitors, brothers and sisters. Every night we visited different cities as part of the caravan preaching strategy.

At the end of the event 4,451 baptisms were reported of well-prepared people who had studied the Word in2,856 small groups, hundreds of small evangelistic campaigns, Bible Sabbath School Classes, Bible seminars, correspondence courses, personal Bible studies and much more. This baptismal number is partial information because many pastors had not reported at the end of that day, and some of them that same night they continue with another week of evangelism. The truth is that the faith goal set by the Missions and Union of 5,000 to 6,000 baptisms for this first part of the year will be surpassed this week. Something unique in the history of this Union.

As a result of this integrated effort 8,543 people continue studying the Bible and preparing for baptism. Behind every baptism, wonderful stories of answered prayers and transformed lives are verified. Here it is just one.

The Story of Ricky – The answer to the prayers of a deaf-mute (as told in the airport by pastor Winston Sarzuri,  Mission Personal Ministries and Evangelism Director)

Ricky, a young deaf-mute native from Riveralta, Bolivia, began to study the Bible by himself.  He came in contact with our church and its doctrines through the Internet. In the public school where Ricky study there are several other young deaf and others students without disabilities. Among them there is a faithful young SDA girl who was asking God how to share the Good News from Jesus to her classmates. When she knew that Ricky was really interested is studying the Bible, she pushed herself to the limit to learn sign language in a record time to witness for Jesus, and she did.  Ricky accepted Jesus and all the biblical doctrines. But while he was studying the Bible he transformed himself into a Bible instructor teaching it to other eight deaf. Last week all deaf from that school attended the evangelistic series led by John Bradshaw. The person in charge of the deaf for the City Hall attended the meetings to translate in sign language. This lady is a Christian, and now she is interested in what SDA’s believes. She and her husband who is also deaf (they have two children without disabilities) are in contact with our local pastors to get SDA Christian materials for deaf. She was encouraged that our denomination demonstrated interest in this special group. According to pastor Sarzury, a small group is forming, and a new congregation is in the horizon with many potential deaf-mute in the largest city in Bolivia. Ricky was baptized this past Sabbath, leaving the water with glad gestures, telling the world how happy he was to give his live to Jesus. Prayer still works! 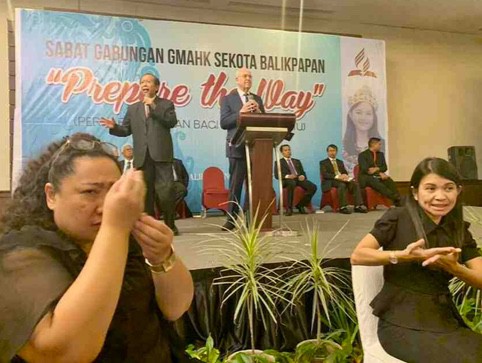 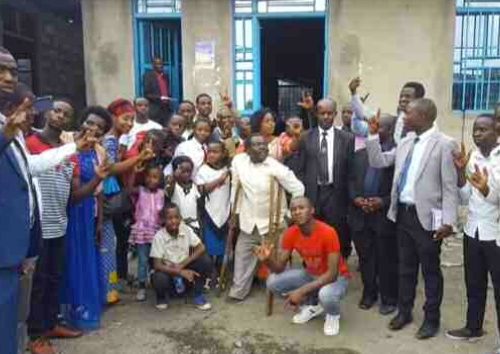